In the modern times, curtain wall facade is an elegant component that shows unique architectural aesthetics of the building as well as plays a critical role in thermal/energy performance and occupants’ comfort, health, and productivity where it reduces undesirable external factors such as rain, heat, storms, and noise, and utilizes favorable factors such as light, air, and sun. To achieve the desirable and intended purpose of facade, criteria should be considered as follows: 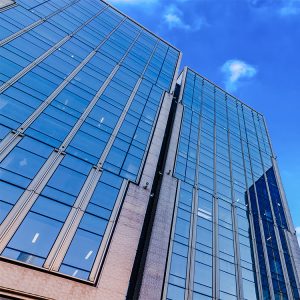 1. AIR TIGHTNESS
It is one of the intrinsic building envelope functions which can be defined as the resistance of inward or outward air leakage through unintentional openings in a curtain wall system. Airtight envelope has several pros in thermal efficiency and comfort which affect substantially in energy savings and HVAC equipment capacities as well. The mold because of moisture could be reduced especially in coastal regions if the facade achieves airtightness standard. In the case of clustered high-rise buildings, the wind tunnel effect must be considered to avoid a negative impact on air leakage and structural failure and stability too.

2. WATER TIGHTNESS
It is another important function of the curtain wall facade system that might cause a dire facade failure in case it happens. It can be defined as the resistance to the passage of water through a facade under specified conditions. Perhaps the most alarming and recent development has been the outbreak of toxic mold growth within walls and the dangers to public health. So, your curtain wall facade system should be sealed with the right compatible and consistent material where its integrity is really crucial. The tested and certified aluminium curtain wall system has a significant role in order to prevent water ingress as well as the best practice of fabrication and installation in the modern commercial building these years.

3. STRUCTURAL BEHAVIOUR & WIND RESISTANCE
No doubt that your curtain wall facade should withstand in front of climatic conditions especially wind load without fail. Although a curtain wall is a non-load-bearing exterior wall cladding where it transfers its dead loads and lateral wind loads to the main building structure through brackets connected at floors through anchor bolts. The curtain wall components should resist the wind load without passing the specified maximum deflection and permanent deformation level even when safety load is applied. It is well known that maximum wind velocities, and consequently design wind loads, vary not only with geographic location but also with height above the ground.

4. THERMAL AND ENERGY
If you would consider structural glass curtain wall in your building project, your glass curtain wall must ensure the optimal thermal and energy performance which reflects a positive environmental and air conditioning cost impact as well as occupants’ comfort and better mood. They are mainly impacted by design strategies such as building orientation, climate, window-to-wall ratio, and glazing type and characteristics which wise consideration will reduce the amount of needed cooling/heating energy, heat loss/gain, and the emission of carbon dioxide.

In short, a building facade is being aesthetically pleasing as well as playing a vital role in energy efficiency and linking exterior building design with interior one. To secure the optimal output of a facade, the aforementioned design criteria should be considered and applied in best practice under facade engineer supervision.