In the modern times, it is very common for people to find some beautiful and tall buildings with types of curtain wall systems in the street, which separate the interior from the exterior, but only support their own weight and the loads imposed on them (such as wind loads, seismic loads, and so on) which they transfer back to the primary structure of the building. This is in contrast to many forms of traditional construction in which the external walls are regarded a fundamental part of the primary structure of the buildings. 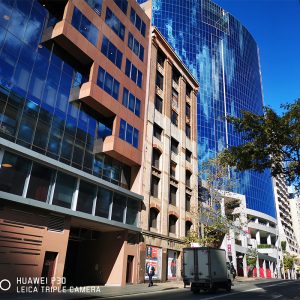 Typically curtain wall systems comprise a lightweight aluminium frame onto which glazed or opaque infill panels can be fixed. These infill panels are often described as ‘glazing’ whether or not they are made of glass. Besides, Curtain wall systems are non-structural cladding systems for the external walls of buildings. They are generally associated with large, multi-storey buildings. In recent years, modern curtain wall design has been widely used in commercial building construction. In particular, the curtain wall glazing makes glass available in large uninterrupted areas to create consistent attractive facades. Furthermore, the use of glass as the curtain wall has the advantage of allowing natural light to penetrate deeper within the building. Meanwhile, curtain wall facade does not carry any dead-load weight from the commercial buildings other than its own. Moreover, modern curtain wall design can resist air and water infiltration, resist sway induced by wind and seismic forces acting on the building, and its own dead-load weight forces. Take structural glass curtain wall for an example. The external surface is the waterproof layer, and hence, all parts of the structure behind are considered dry. This is not to say that there is no chance of moisture, as condensation must still be considered. Normal practice would be to allow a small amount of air movement behind the outer skin, but in the case of PV it should be increased, if possible, to provide some cooling from the rear surface of the PV. The advantage of structural glass curtain wall is that it allows a continuous skin incorporating all the facade elements—windows, PV, and blank panels within a proven design. These systems are complex and expensive without the PV and so the additional cost may be more readily absorbed into such a facade

With the continuous development of technology, high-rise commercial buildings with aluminium curtain wall together with the drive to make them energy efficient have been largely responsible for development in the field of architectural glazings, and the main focus of window glass design has been on improving its optical and thermal properties. Special highly transparent and heat-reflective glazings will be used to save energy by reducing heat loss through windows, or using solar transmittance control to minimise cooling and air conditioning costs in applications. Some window glazings are also used for light enhancing and redirecting or decorative purposes.

Next: Why does curtain wall construction become so popular today？