In the modern society, curtain wall buildings have become very popular both in residential and commercial applications. In practical applications, curtain wall includes a full cladding and exterior wall system excluding indoor finishing. These walls usually supported by a spider system or cables, the panels are separated by grids without mullions and transoms. 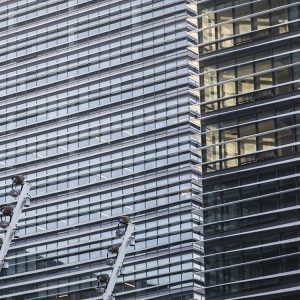 Components of a Curtain Wall
The complete unit of curtain wall system generally consists of four major structural elements as follows:
1. Transom
2. Mullions
3. Vision Glass
4. Anchor
Transom or horizontal rails are horizontal members on the curtain wall panel. The mullions or vertical rails are anchored to the edge slab or beam. These are mainly involved in supporting the dead weight of the curtain wall. In conventional or sticky curtain wall system each system has to be placed one after the other. High quality check and precision in required for the installation.

Structural Behavior of Curtain Walls
Past studies have showed that curtain walls seem to be resistant against lateral forces mainly earthquake, but there is measurable amount of damage caused. Even though damage can be repaired, there is economy loss and delay in business activity. Structural glass curtain walls are generally considered as structural elements of a building. As it acts as a partition between exterior and interior environment of the building, it has a role in transmission of loads acting for structural stability. It transmits wind induced loads to the primary structure. It also resists the seismic accelerations keeping the occupants comfortable. Other than this it has to resist gravity loads coming over it. When considering the durability of the building, curtain walls play an efficient role in adapting to different temperature ranges. This is because of the case in high rise building, as the number of floors the temperature seems high and would be a risk factor for the occupants working in those floors. It is also required to have resistance against water penetration and hence stop corrosion.

Next: Curtain Wall Building：The Trademark of the Modern Cities Nowadays