How to improve the glass curtain wall flatness

Nowadays, Glass walls are a common sight in modern cities. In other words, glass curtain wall is a beautiful and novel method of building wall decoration, which is a prominent feature of the modern high-rise building era. 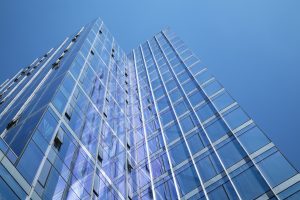 In general, curtain walls are made of metal poles called mullions, which make up the framing of the walls or panels. It is an external, non-bearing wall that is hung off concrete slabs via anchors. Unlike punched windows, curtain walls cover the entire exterior of the building, which makes it suitable for commercial use. In practical applications, unlike window wall, which sets units of glass within the structural components of the walling, curtain walls are suspended over the building’s structural elements, providing cover, but no support. Because of this, each unit is longer than a window wall unit – 14 feet or higher and extends beyond the length of one floor. Curtain wall units are also taller than the typical storefront unit, which generally measures 10-12 feet in height.

Factors Affecting Construction Errors
1) Since the hidden frame glass curtain wall is bonded to the aluminum alloy frame (sub-frame) through the silicone structural sealant, and then fastened to the aluminum alloy frame by the fixed clamp as well as the stainless steel bolt, sub-frame is a point connection due to the fixed clamp and the aluminum alloy. At the contact point, due to the different degree of tightness of the fastening bolts, the force transmitted to the glass through the structural adhesive is different, and the scene reflected by the glass surface will be distorted. At the same time, the spacing of the fixed clamps is not different, and this phenomenon will also occur.
2) Due to the construction error in curtain wall frames, the beams, column distance are different. After the glass is installed, the adjacent two pieces are not in a plane, and distortion will occur.
3) In the process of filling structural adhesive and maintenance process, due to improper method, the structural adhesive is pressed before curing, resulting in different thickness of structural adhesive, and the surface of the glass will be uneven after installation.

2. Measures to Reduce Glass Distortion
1) Use a suitable connection method to make the glass surface evenly stressed. For example, the aluminum alloy frame can be suspended on the aluminum alloy frame so that the glass naturally hangs down and the force is even.
2) Reasonable design of the fixed clamp spacing.
Based on long-term experience, the distance between the first clamp and the glass edge is between 100 and 150 mm, and the spacing between the intermediate clamps is preferably between 250 and 300 mm.
3) In the structural adhesive and curing stage, in order to avoid the structural adhesive pressure, there would be separated between the glass components by the mat, the height of the mat should be higher than the sum of the thickness of each structural adhesive of the aluminum frame.

Previous: How to Select The Right Glazing for Your Curtain Wall Building

Next: How curtain walls can maximize the natural light in office buildings